Sepsis survivor, Ronda Wilson, reveals the impact the Covid-19 pandemic has had on her physical and mental health

In November 2018, Ronda underwent laparoscopic surgery to diagnose and treat endometriosis. Within 48 hours of the procedure, she began to experience the symptoms of a catheter associated urinary tract infection (UTI). Very quickly this infection developed into urosepsis, pushing Ronda hours away from death. Though the hospital was able to save Ronda’s life, it did not adequately treat the underlying UTI, and though she was discharged from hospital, she was not cured.

The UTI was caused by bacteria able to resist the antibiotics that Ronda had been prescribed. The inadequate treatment of the infection at the acute stage has seen the infection become a multi drug-resistant chronic infection also known as an obligate intracellular bacterial infection. It has had a devastating impact on Ronda’s life, causing unbearable pain, incontinence, harm to her mental health, fear and embarrassment, and straining relationships with friends and loved ones.

For Ronda, the lack of public awareness of the threat of drug-resistant infections is shocking, “It’s a global serial killer. At present, a person will only be aware of the issue if they happen to suffer from a superbug, know someone who suffers from one personally, or stumbled across a rare article hidden deep in a newspaper.”

Ronda’s resistant infection took hold because she was not treated fully in the first instance until she was symptom free, and the follow up treatments have been ineffective in curing the infection too.

“Most people in my position have been prescribed many short, rescue courses of tablet or intravenous antibiotics, ranging from three to 14 days. Too often the urinalysis tests come back negative, despite symptoms persisting. Even though it’s known the usual dipstick test is wrong a third of the time, the so-called rapid tests available to doctors haven’t progressed in nearly six decades. When you experience a chronic infection, it is all too common for doctors to dismiss the pain and attribute it to one’s mental health instead.”

AMR is an urgent issue, a global threat to life and to modern medicine. It must be taken seriously by the government.

For Ronda, her first-hand experience has highlighted the necessity of tests that accurately identify infections and determine treatments that eradicate infections first time.

“I am very worried that the NHS’s gold standard for testing urine for infections is 50 years old – infections are too often being missed. AMR is an urgent issue, a global threat to life and to modern medicine. It must be taken seriously by the government. It requires long-term planning and strategy to tackle the issue and will require significant amounts of money and resources to develop new antimicrobial treatments and accurate diagnostic tests, to ensure we preserve the effectiveness of those treatments.”

2020 has been a difficult year for Ronda, with Covid-19 infections in the UK ballooning in number in March. She has faced many challenges as a result of her multi drug-resistant infection, impacting not only her physical health, but her mental wellbeing too.

Having previously experienced the near-death reality of sepsis, and living with the threat of its return, the danger of a potentially deadly virus sweeping through the country was hard to bear. The failure of medical supply chains were well documented at the start of the outbreak in the fight against Covid-19, but the knock-on impacts were felt much wider.

“Around the start of lockdown, in early April, I ran into a spot of medical bother which sent a huge surge of panic and fear through my mind, not least because of my battered immune system. My specialist prescribed a new antibiotic treatment to me, which was unavailable. Most worryingly, there was no alternative to take its place at the time.”

As a sepsis survivor, Ronda erupted with fear and had to contend with the turmoil and anguish that has plagued her since she contracted her resistant infection.

“I found myself in an extremely precarious position and feared that if my infection remained untreated and my immune system floundered, I would have been a prime candidate for contracting a deadly dose of the virus that was spreading like wildfire. If I had contracted Covid-19, it was probable that I would have had to face the demon of sepsis again.”

I honestly believed I had succumbed to Covid-19 and truly feared the worst.

Ronda was not able to get the treatment she needed for many weeks and took extra steps to shield herself. She followed the government guidance to stay at home. All of her hospital appointments and therapy sessions took place over Zoom or on the phone, she only ventured outside for a fortnightly trip to the pharmacy and to pick up groceries. People with chronic drug-resistant infections were not included on the UK government’s list of people asked to shield, despite their compromised immune systems and susceptibility to new infections, so were not able to secure priority slots for online supermarket deliveries.

Thankfully, Ronda was able to eventually fill her prescription, but as the levels of infection in the UK subsided, and the country began to unlock at the start of August, she began to feel unwell. The symptoms of her chronic UTI had reduced in severity, she had no episodes of incontinence, but she was bed-ridden for weeks.

“I had gone from one extreme to another. I was suffering from unbearable nausea – day and night. I had extreme tiredness, sleeping 20 hours a day. I was weak, my muscles ached, I had recurring headaches, an upset stomach, and a fever. I honestly believed I had succumbed to Covid-19 and truly feared the worst. My mental health was in tatters, I cried most days and I suffered suicidal thoughts.”

Ronda was able to visit a drive-through Covid-19 testing centre. The test came back negative.

“Instantly, the fear of sepsis and all-too real threat of death lifted. Naturally, I thought it was a matter of riding out the storm of whatever bug I might have until I felt well again.”

With the symptoms persisting, and Ronda at the brink of a physical and mental breakdown, she consulted the information leaflet accompanying her antibiotic treatment,

“To my horror, and confirmed later by my specialist, this episode of ill-health was a side effect of the antibiotic medication. Although I felt relieved, at the same time I was utterly bewildered that an antibiotic, a tiny white tablet, made me so ill that I was convinced I had contracted Covid-19. Within days of discontinuing the medication, I felt a thousand times better.” 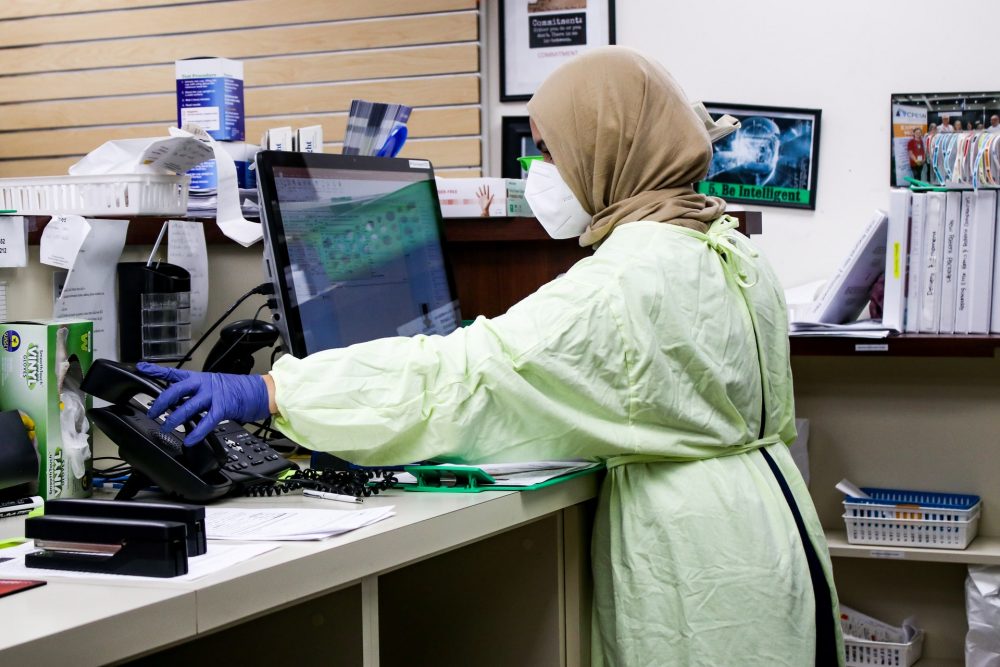 It is an experience familiar to many people with chronic multi drug-resistant infections; for most people antibiotics have few or no side effects; for those needing treatment with antibiotics of last resort, the side effects can be dreadful. Ronda has started a different antibiotic treatment regimen and is doing much better.

AMR has been a major health issue for years and years, all before Covid-19 emerged. Governments around the world are fully aware that antibiotic resistance is a killer.

Ronda hopes that Covid-19 will not distract from the ongoing fight with drug-resistant infections, in fact she hopes the viral pandemic is a moment that will focus attention on the issue of infectious disease treatment.

“It has been reported that in Wuhan, where the first cases of Covid-19 were identified, and before a lot was known about treating the disease, a number of people who had been hospitalised for Covid-19 and placed on invasive ventilators, died not from the virus, but from secondary bacterial drug-resistant infections that developed in to sepsis.”

The wider impact of drug-resistant infections on the Covid-19 mortality rate is not yet known, but will no doubt be the subject of study as the world emerges from the pandemic.

“I hope the NHS and the government will review all of the data and statistics around causes of death and ongoing infections, and prioritise the development of new solutions to combat drug resistance.”

The mobilisation of government resources and the NHS in response to Covid-19 has been enormous, and while Ronda hopes that this might produce a change in attitude in the prioritisation of treatments and diagnostics for drug-resistant bacterial infections, she is not confident,

“AMR has been a major health issue for years and years, all before Covid-19 emerged. Governments around the world are fully aware that antibiotic resistance is a killer. It exists! It is real! As the pandemic continues to spread, we are in a second wave in the UK and Europe. This could further delay responses to AMR and slow the development of solutions.”

For Ronda, a silver lining from the pandemic may be a greater awareness and appreciation among the wider British public of the terrible impact that infectious diseases can wreak on society. She believes the campaign needs to be spearheaded by government.

Covid-19 should be a wake-up call for the horrific impact of uncontrolled infectious diseases.

“It needs to be taken seriously by our government, for drug-resistant infections to receive a comparable degree of publicity and ministerial attention as Covid-19 has, not least because secondary bacterial infection and sepsis have been a reality for many Covid-19 patients.”

She is more hopeful that there will be longer term changes in public health thanks to the hygiene measures implemented this year. With people attending GP surgeries and hospitals wearing face masks, washing their hands and using sanitiser, Ronda believes surgeries and hospitals have never been cleaner. She would like to see them become a compulsory feature in medical facilities to reduce the spread of hospital acquired infections that are, or can become, resistant to antibiotics.

“The role AMR has played in Covid-19 deaths must be looked at in great detail as the data becomes available. Just as there were and will be avoidable deaths during the pandemic, the same is true for drug-resistant infections. We have missed too many opportunities to invest in new treatments to save lives”, explains Ronda, looking to the future.

“Covid-19 should be a wake-up call for the horrific impact of uncontrolled infectious diseases. It is having the same level of devastation that AMR is already having on global health, yet AMR is something that is only going to get worse unless there is similar major intervention. We need urgent action; it requires money and resources. I would not wish the physical pain and mental anguish of living with a drug-resistant infection that I have experienced on anyone. We should be doing absolutely everything to deal with resistant infections.”

AMR Voices Series: Do We Really Want Another “New Normal”?