Being able to fasten a necklace is something most of us take for granted but, for Shona Patterson, it was a cause for rejoicing.

Shona hadn’t been able to lift her hand above her chin since suffering a stroke four and a half years earlier.

But, after regularly using NeuroBall, a sensor-studded video game controller designed to make physiotherapy fun and effective, she was able to do up her necklaces again.

She could also brush her hair, flick a light switch and turn on her cooker. Dressing and undressing were also easier.

“It’s amazing! After four and a half years, to still feel you can achieve things.

“Being able to do these small, everyday things again when you have been so sick is really profound.” 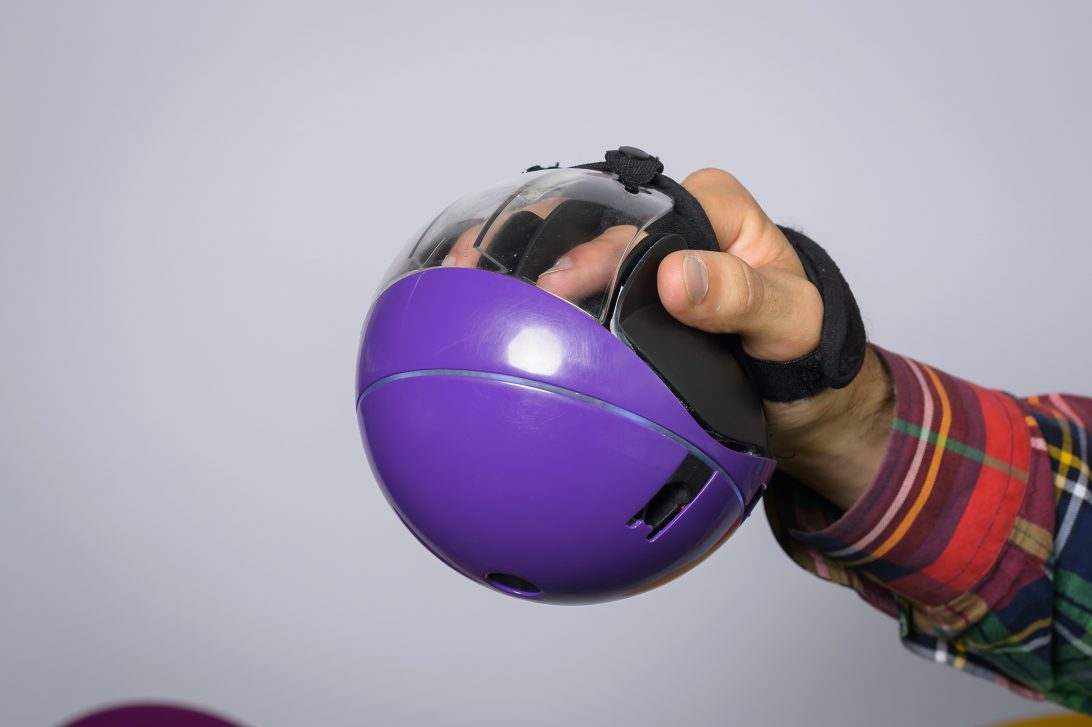 The NeuroBall, from start-up Neurofenix, was the winner of Nesta Challenges’ Inventor Prize.

Launched in 2017, it aimed to find Britain’s “hidden inventors” – the garden shed and kitchen table creatives whose gadgets and gizmos could transform the lives of others, if only they knew about them.

Finalists included a high-tech catheter, a Kindle-like Braille device for the blind, a smart gum shield that could save athletes lives and a 3D-printed prosthetic arm for babies and toddlers, designed by a father for his young son.

Some 100,000 Britons have stroke each year and, with 1.2million stroke survivors in the UK, the condition is the biggest cause of adult disability.

Almost eight in ten survivors lose control of their hand and arm, which can make everyday tasks such as washing, dressing and cooking incredibly difficult, and even small improvements in dexterity can have a big effect on quality of life.

However, the home exercises vital to recovery of the brain and muscles are repetitive and can quickly become boring.

The NeuroBall aims to revolutionise stroke rehabilitation by making it fun by pairing a person’s hand movements with progress on video games that can be played at home.

Sensors in the “ball”, a smart controller, allow the games to adapt to a person’s ability and ensure that they – and the exercises – become more challenging as recovery progresses.

The Inventor Prize, which was funded by the Department of Business, Energy & Industrial Strategy (BEIS), was designed to tap into Britain’s heritage of world-beating inventions, from Sir Alexander Graham Bell and the telephone to Ada Lovelace and the computer.

It sought out early-stage ideas from individuals, teams and small companies for products that could make people’s lives better but were likely struggle to reach their potential if they went it alone.

The 180 entrants were whittled down to ten finalists, each of whom received a package that included £5,000 and bespoke mentoring from Barclays Eagle Labs in areas from business development to public speaking.

The finalists developed 11 new partnerships during the prize process most felt they would be ready to enter the market within 12 months of the final. Six months after the September 2018 final, several had expanded, creating new jobs and some were considering expanding into other markets.

These include Neurofenix, launched the NeuroBall in February 2019, just a few months after winning the £50,000 first prize.

“The challenge prize allowed us to go from a prototype to a sellable product that we will believe will improve the lives of millions of stroke survivors who have given up on their recovery and are desperate for help.”