Touco’s app is designed to help people in vulnerable circumstances who need help managing their finances from a trusted family member or carer, for example those with long term mental health problems, learning difficulties or memory problems.

Collaboration and support around managing finances is particularly important for those who are made vulnerable by their mental health or capacity, since they are more likely to fall victim to fraud or scams, or to be spending erratically. Currently the only ways to support a loved one who needs this type of support is through a Power of Attorney; these are time consuming, daunting and expensive to put in place. Touco is designed to be a light touch alternative.

The app was originally developed through an inclusive design project, working with experts by experience through the Money and Mental Health Policy Institute. The findings from this first pilot stage were written up and published in a report, Let’s Talk About Money. In November 2019 the app was announced as a finalist of the Nesta Challenges Open Up 2020 Challenge, providing funding to create a new version of the app designed after initial user testing. The new app was built, launched and tested in 2020. Both apps use Open Banking to connect to and share user transaction data. 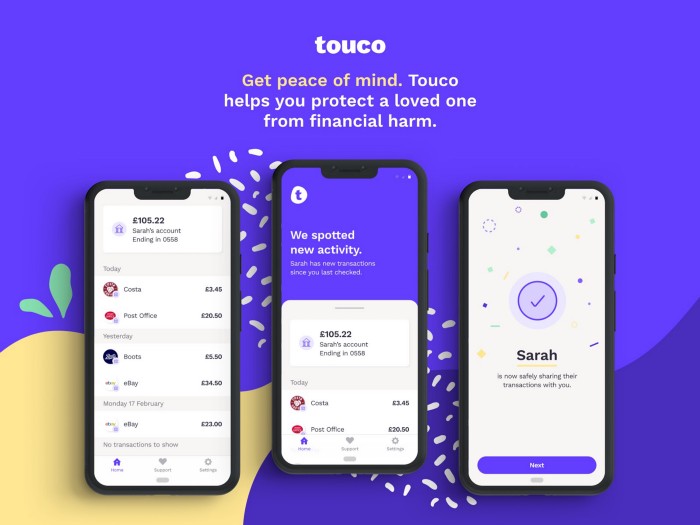 Touco’s app is designed to help people who are unable to manage their own finances fully independently. These include people with mental health problems such as Bipolar disorder or Borderline Personality Disorder (BPD), as well as those with learning disabilities, dementia and other circumstances which affect memory, understanding or mental capacity.

Designing for people in vulnerable circumstances presents both opportunities and challenges. Touco’s app was designed to help alleviate anxiety and stress for both carees and carers, using Open Banking to give the carer peace of mind through visibility of the caree’s financial situation. This visibility limits the potential for harm for the vulnerable caree, improving their financial and mental wellbeing.

However, setting up and using the app presented several challenges for carers and carees due to their vulnerabilities, which this paper explores. We hope that these findings can be used to help improve the implementation of Open Banking and Open Finance for users in vulnerable circumstances in future.

Two versions of Touco’s app were launched and tested across 2019 and 2020. The first app tested proactive ‘third party alerts’: text messages alerts triggered by bank account activity, sent to the carer. The second app gave the carer full visibility over their caree’s spending, with a live transaction feed displayed in a smartphone app.

Designs were tested throughout the development process, and both apps went through user testing when launched. For the first app pilot testers were recruited through the Money and Mental Health Policy Institute’s research panel, and for the second app testers and users were found through Touco’s mailing list and network. As part of Nesta’s Open Up 2020 Touco also used the UserTesting.com platform to test prototype onboarding journeys and other designs.

Feedback on the concept was overwhelmingly positive. Many carers said that the app would work well in a scenario where a caree was largely independent but had some care needs.

However, when the app was downloaded and used, carers and carees encountered practical challenges and barriers that prevented them from seeing the intended benefits.

For Touco’s user base a lack of confidence using digital tools presented a barrier to use, particularly since the app concerned banking data. For example, we spoke to carers whose elderly parents needed care: for them, visibility on spending would be very useful, but their parents did not use online banking, and were not interested in using Open Banking.

“I’m quite interested personally, but it wouldn’t work… she would never use an app.”– Feedback from one carer

For those who were able to use online banking to connect their account, the majority did not use a smartphone, instead using a tablet or a laptop. The onboarding journey, therefore, was made more difficult: rather than using biometrics and app-to-app redirection on a smartphone, users had to locate their online banking login credentials to use with a keyboard. This slowed down the onboarding process and led to increased dropoff rates.

We explored several possible solutions to help carees connect their accounts, including talking them through the process over a call or recommending that their carer assist them.

One opportunity here would be for an assisted onboarding process to be created, whereby a user could consent in one step, with the technical parts of the Open Banking connection having been completed by a helper. The challenge here is that any helper or carer would need to have access to their caree’s online banking credentials to complete the onboarding, thereby exposing them to fraud and negating the need for view-only access to transaction data (since the carer can then simply log into their online banking account on their caree’s behalf at any time).

The longer term opportunity for Open Banking and Open Finance is to enable ways to connect to or share data without a digital interface. In the meantime improvements to the usability of the onboarding process on tablets, laptops and older smartphones can also improve accessibility.

The biggest barrier to use for the vulnerable consumers Touco has dealt with is a lack of trust: trust in online banking and Open Banking, trust in technology generally, trust about the use of data, and trust in the Open Banking agency model.

Carers told us that although they were satisfied that the app was trustworthy, they were hesitant to suggest it to the person they care for because they knew their trust levels in technology and banking were low.

There are constant messages nowadays about keeping your banking details safe, and the security of using online banking. People in vulnerable circumstances are particularly sensitive to these messages since they are worried about being taken advantage of. Time and time again carees told us that Open Banking felt untrustworthy:

“In the media there’s all sorts of things about keeping your financial data secure.”

“To be quite honest with you, I was really, really sceptical about it.”

“I mean we hadn’t heard of Open Banking… it is not well advertised really.”

“As it’s very new… I’m just very anxious and kind of scared on how trusting and safe it will be as it’s to do with banking.”

At Touco we were able to overcome this lack of trust initially by hand-holding users through the onboarding process and reassuring them about our intentions as a design team. For example, one caree said, “Normally I would have reservations about giving people access to my account, but because I understand the ethics behind this… I am happy for that to go ahead”.

Trust in technology generally was also a hurdle to overcome for some potential Touco users. Carees told us that they were worried their devices would be hacked, or that their information was being used against them. For some users with mental health conditions that made them anxious or paranoid, this fear was particularly bad:

“Not everyone trusts smartphones. For myself, for example at the moment, I don’t trust smartphones.”

“I love my laptop computer, but it frightens me. Even though I was used to working on one in work, but it frightens me because I think, you know, when you are looking at something and then they give you all of these things then and I think, well how do these people know that I have been looking on this site and that site.”

Improving trust in Open Banking and the technology around it must be a priority if it is to benefit all consumers. For apps like Touco it is important to incorporate as much trust-promoting content as possible throughout the onboarding process for those who need it. For example, we have tried to bring in the same messaging as we used over a hand-holding call with our initial users into the digital experience.

Lastly, one area that needs to be addressed is how firms who use Open Banking under the agency model should be described to consumers. Touco is one such firm, working with OpenWrks as we work towards becoming directly regulated. Users found this relationship difficult to understand, since they were looking to confirm that we were trustworthy by searching on the FCA register. This issue was made worse by the fact that OpenWrks’s official name is actually Business Finance Technology Group Ltd, confusing users further:

“I searched for Touco on the FCA register and the Open Banking directory as advised, but could not find them.”

“When you searched OpenWrks on that register it didn’t come up, but if you look… because OpenWrks is registered as some other name.”

This complication does nothing to reassure consumers that Open Banking is safe. There is an opportunity here to improve visibility and accountability for firms using the agency model, which should lead to improved trust in the system.

Touco’s onboarding process is necessarily time-consuming, since it involves two people securely creating an account and consenting, as well as the caree connecting their account using Open Banking. This longer onboarding process would not necessarily be a barrier to use, though, if the value exchange for users was strong enough. In other words, if the functionality of the app is amazingly useful, users are more likely to persevere through a more difficult onboarding process.

As we tested Touco, however, we discovered that carers and carees ideally wanted more functionality than Open Banking was able to offer.

Users gave feedback that they wanted alerts to be real-time, so that if there was a problem they could attend to it straight away. Unfortunately we were only able to query the Open Banking APIs four times a day, so alerts were not real-time.

“I find it quite annoying when there’s a delay when you know that there is a transaction that has happened and you have to wait before it shows up.” – One caree user

Users also said that alerts and view-only transaction data were useful but only in a limited, reactive way. They overwhelmingly wanted ways to stop problematic spending before it occurred, for example by switching on dual authorisation for transactions or spending limits for certain categories, neither of which are possible using Open Banking alone. Touco is now exploring how this functionality might be built using prepaid cards.

As Open Finance expands beyond Open Banking there may be opportunities to widen the functionality and scope of these APIs along these lines.

Open Banking and Open Finance have the potential to help many millions of consumers in vulnerable circumstances, whether it be to protect them from scams and compulsive spending or to help them save money and find a better deal.

Improving access means we must overcome the challenges outlined in this paper:

The Touco team continue to test improvements to their app and are investigating how prepaid cards might improve functionality for carers. They are now working with banks and other organisations to help implement effective third party access tools, as well as other features designed to support vulnerable customers. Find out more at usetouco.com.

We would like to thank Nesta Challenges and OBIE for inviting us to share these findings and for their support on our journey.

Bailey Kursar is CEO and co-founder of Touco. Founded in 2018, their mission is to help people in vulnerable circumstances manage their money better, supported by someone they trust. Before starting Touco, Bailey worked in a number of product and marketing roles in financial services technology companies, including Monzo, MarketFinance and Zopa.