The LGBTQIA+ individuals helping to diversify the field of STEM

Yesterday was LGBTQ+ STEM Day and it’s also Trans Awareness Week, which is why we’re celebrating all of the brilliant LGBTQ+ people across the different areas of STEM!

November 18th was chosen as the date to mark this important community by leading organisation Pride in STEM, due to its significance in the fight for LGBTQ+ rights. It was on this date that Frank Kameny, an American astronomer, took his fight to the Supreme Court (the highest level of the US judicial system) against being unfairly dismissed from his position at the U.S. Army’s Map Service because they found out he was gay . Although Kameny did not return to his work in science, he continued to be an activist until his death in 2011, and is recognised by many as a key figure in the Gay Rights movement.

Every year between November 13th to the 19th, it is Transgender Awareness Week, which helps raise the visibility of transgender people and address issues members of the community face. This takes place before Transgender Day of Remembrance (TDOR), an annual observance on November 20th that honors the memory of the transgender people whose lives were lost in acts of anti-transgender violence that year.

Visibility is an important part of diversity and inclusivity, and this is especially so in areas which have powerful stereotypes about the types of people who enter them, such as in STEM (Science, Technology, Engineering and Maths). Unfortunately, STEM subjects and careers have traditionally been perceived as masculine and dominated by heteronormative narratives, the idea that binary gender identity and heterosexual orientation (meaning, there are only two sexual orientations and genders) are the norm. It’s estimated that LGBTQ+ people are represented 20% less in STEM fields than should be expected, and another study highlighted that LGBTQ students are 7% less likely than heterosexual students to persist in STEM after four years in the field.

By recognising, celebrating and amplifying the stories of LGBTQ+ people who have worked or are currently working in STEM, this not only helps to evidence the diversity in the community – which does exist, despite the challenges faced – but it also promotes positive role models for the next generation, hopefully encouraging a new and increasingly diverse generation of young people who will go on to work in STEM fields.

Some great organisations working in this space with fantastic resources and LGBTQ+ profiles to explore and share include: 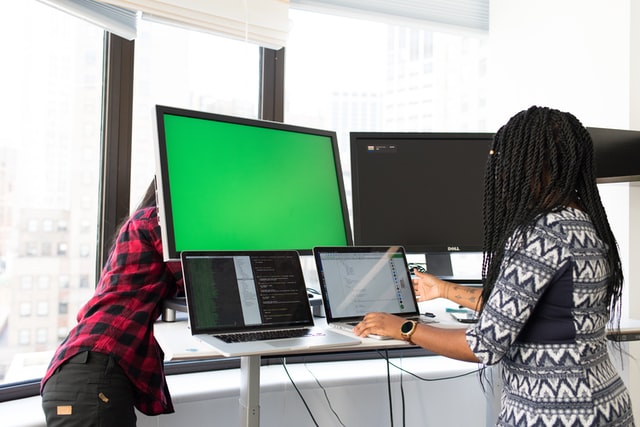 Below, we’ve included just some of the LGBTQ+ figures who have worked or are still working in STEM, but we know there are so many more, so make sure you let us know about anyone who you want to recognise on this day!

Dr Mavalvala is an openly queer Pakistani-American astrophysicist, who is a professor at MIT and most recently become the Dean of MIT’s School of Science – the first woman to take this position. A key member of the Laser Interferometer Gravitational-Wave Observatory (LIGO), her work has received widespread recognition and acclaim.

Emma Haruka Iwao, a developer at Google, is well-known for breaking the world record for calculating Pi. The previous record was 22 trillion and Iwao calculated it to 31 trillion on March 14th – Pi Day no less! Iwao has also expressed the importance being vocal about her achievement as part of supporting the visibility of the queer community and celebrating their acheievements within STEM.

Esposito is an assistant curator at the Schlinger Chair of Arachnology, the study of spiders and other animals, such as scorpions. Esposito is also the co-fouder of the brilliant campaign 500 Queer Scientists, which showcases the different stories of the queer community within STEM.

Cook is probably most well known for being Apple’s CEO,  but in 2014 he came out in an open letter, which made him the first openly gay man to be a CEO in a Fortune 500 company. Cook reported that he wanted to come out to be a role model for young people struggling with their sexual orientation.

Clayton was a renowned physicist in Nuclear Criticality Safety and Health while also being a leading trans activist, in particular with the organisation Press for Change. Clayton was awarded an MBE for her activism work and service to gender issues in 2006.

Barres is revered for making key discoveries in biomedical research as a neuroscientist but he also spent lots of his time campaigning for gender issues. Barres transitioned in 1997 and was vocal about the difference in treatment he received prior to this when working in science. Barres was also the first openly transgender person elevated to the US National Academy of Sciences.

Carver was an African American agricultural scientist and inventor, he was also reportedly bisexual. He was the first African American to earn a Bachelor of Science degree and went on to conduct both research and to teach in higher education. He developed over 300 products from peanuts, from beauty products to paints!

Arnold is a professor of chemistry at the University of Edinburgh, who has received wide recognition for both her work in chemistry and gender issues. Arnold is openly bisexual, one of only a few well-known female identifying scientists from the UK.

Carpineti is an astrophysicist and the co-founder of Pride in STEM – the organisation leading this important day! His passion for showcasing the diversity of LGBTQ+ individuals working in STEM aims to help continue to shape attitudes and support everyone, no matter their sexuality, to be able to be their authentic selves in any context.