The challenge of common problems

The Challenge Prize Centre is scoping a new series of challenges, each aimed at improving the measurement of our common social and natural capital.

In a previous blog I explored measurement as the foundation of some (not all) of the economy’s ills. The idea can be summarised like this; our common measurement standards facilitate interaction, and the economy is an aggregation of these interactions. International trade, for example, depends on a minimum level of trust that the seller is using the same measures as the buyer – that a meter is a meter everywhere.

The problem is that things that don’t have common standards often exist ‘outside’ of the economy; they’re externalities. We can’t charge people for degrading much of our common social and natural capital – things like breathable air, drinkable water, biodiversity, social mobility, trust and education – while organisations that seek to improve it often struggle to attract funding. Think about the energy sector and the third sector. The former is responsible for almost a quarter of greenhouse gas emissions and until recently wasn’t compelled to pay for these emissions. The latter struggles to attract funding, due largely to the difficulties involved in measuring its impact. Econ 101 tells us that externalities lead to an oversupply of goods and services that degrade social and natural capital, and an undersupply of those that improve them. The Universal Commons Measurement Challenge is looking for new measures of social and natural capital that can help to define these standards, and attract the investment in them needed to make the economy more sustainable.

Why start with measurement?

Last year when the world’s reference kilogram ‘Le Grand K’ was replaced by the Kibble Balance it was decided by a group of scientists that came together and voted for it. This tied together a project that started with the French Revolution (a mere 230 years ago) to define global standards of weights and measures, standards kept by the people. This served as a timely reminder that the measures we use everyday – for time, temperature, light and pressure – are social constructs. Constructs that quickly became a part of the social and economic fabric, woven into the background of our daily lives. This is undeniably a good thing but it also makes it easy to forget that there’s a suite of things that still escape the grasp of our most modern measurement instruments.

Think about two of the greater social and environmental challenges of our times; economic inequality and climate change. In the first case, we’re guilty of putting too much emphasis on the measure of gross domestic product as a proxy for economic growth and development. We’re now realising that this is the economic equivalent of using a person’s weight as the sole indicator of their health. It’ll tell you something, but no doctor would use it to diagnose anything other than a change in weight. The second case shows us the problems of pursuing economic growth at the expense of sustainability. It has cost us the holocene, that period of blissful geological stability so impacted by climate change. We’re now attempting damage control, complete with an emphasis on developing scientifically robust metrics for things we wish we’d measured and valued decades ago. Both are cases of ‘measurement myopia’; forgetting the limits of what we can measure, and what our measures tell us.

In 2017, this idea was typified in Kate Raworth’s “Doughnut of social and planetary boundaries”; the minimum social conditions and maximum environmental boundaries humanity should be acting within. The doughtnut shows we fall short on all social conditions, and have already exceeded some important planetary boundaries. This is a useful depiction of “humanity’s 21st century goal” and, like the UN’s Sustainable Development Goals, serves to define what a more equitable and sustainable society looks like. However, my favourite thing about the doughnut is it reinforces that these things are part of the global commons. They belong to us, and we need to work to protect them. 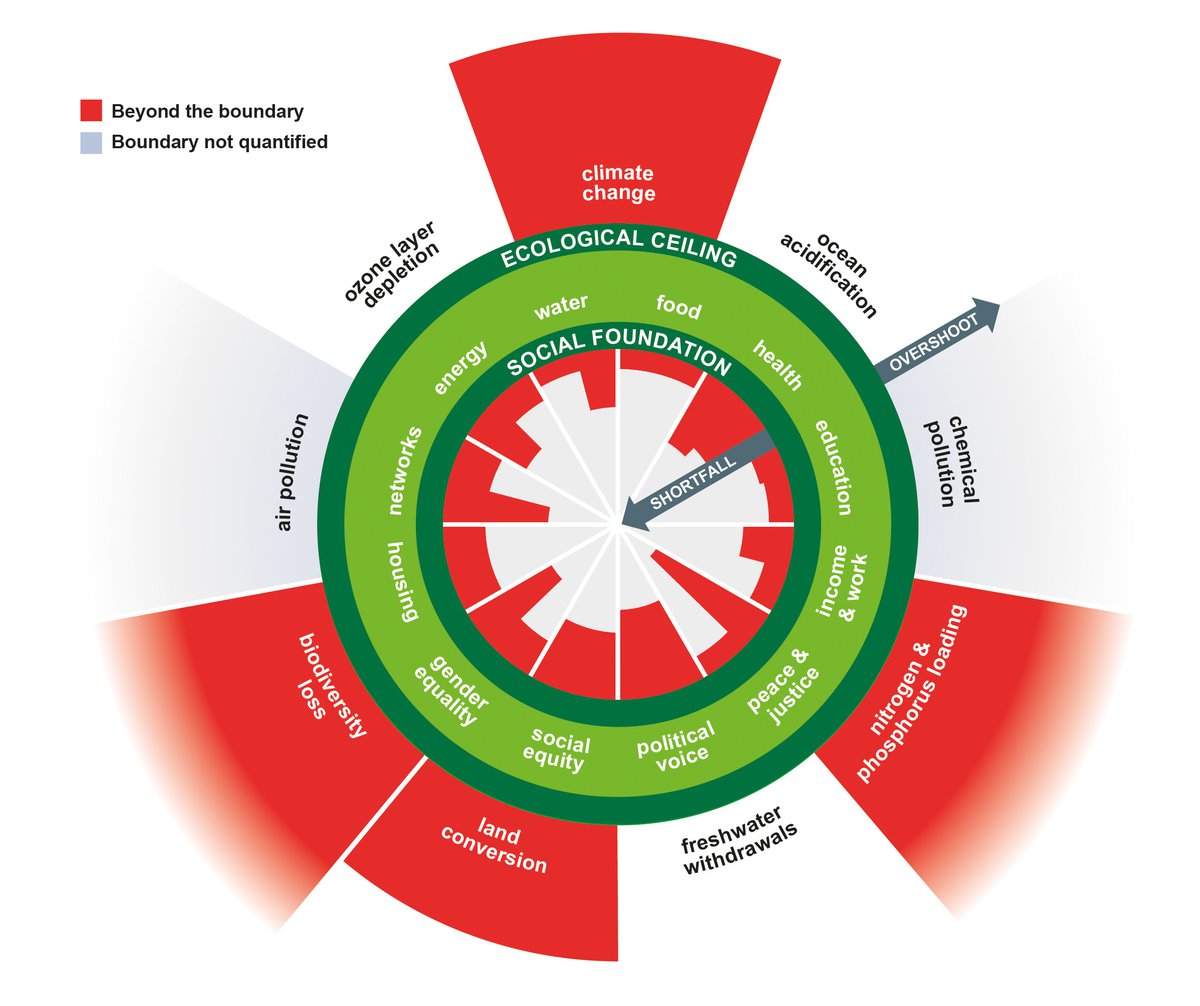 These are two problems – focusing on what’s important and integrating its value into the social and economic fabric – that the Universal Commons Measurement Challenge is looking to address. But the idea is much broader than that. The Universal Commons also aims to address the OECD’s recent diagnosis of the challenges faced by sustainable development finance.

OECD (2018) Global Outlook on Financing for Sustainable Development 2019: Time to Face the Challenge

Their report, alarmingly (for the OECD) subtitled ‘Time to face the challenge’, says that “successful delivery of the different resources by the different actors, targeted where the resources are needed most and where they can have the greatest impact, will rely on better measurement frameworks and tools”. We’re not currently moving fast enough to address key social and environmental issues, as the Intergovernmental Panel on Climate Change warned the world last October. We’re also not spending nearly enough; we need about £2 trillion to achieve the Sustainable Development Goals, 17 times what was spent in official development assistance in 2017.

We need better measures and a comprehensive framework that allows investment to be used in the most efficient way possible. We need to support ideas that can be proven to work, in the areas where they’ll have the greatest impact. We need a social consensus around how we measure their impact across society and the environment.

The Universal Commons Measurement Challenge is a metrics challenge. Well, it’s a series of metrics challenges all focusing on distinct areas of social and natural capital. The aim of the challenge is to provide a rallying metric that can be used by businesses, investors and philanthropists alike to coordinate their investments into proven improvements of social and natural capital.

The first will be in air quality, where applicants will be asked to create a scale of ‘clean air’ and its impacts on human health. The scale, from clean air to highly polluted air, will include all the relevant pollutants that impact health, weighted according to how bad they are for us. This means that anyone who improves the quality of our air can use the scale to measure their likely impact on the health of those that breathe it.

With enough organisations using the metric and investors insisting on its use, we can start to develop a ‘unit price’ for clean air. Once we have this, the investment community can purchase improvements in the air once they’ve been proven to occur. They can also use the unit price for clean air to determine the value of their investment in different areas; their money can follow the most cost-effective avenue, and generate cleaner air for the greatest number of people.

But air quality is just the beginning. The challenge will look to any area where we need to develop and agree on better measures; what is drinkable water? What is a socially desirable level of literacy? What does it mean to trust our peers, and be isolated from them? Our attempts to define and measure these things can bring greater clarity and progress to areas where we need truly universal solutions to our commons problems.

This is just the start of a programme that seeks to build the foundations of a better capitalism, one measure at a time.

Come along to Nesta on 20 February to hear all about measuring air quality, and the Universal Commons.

Five areas we need innovation in the water sector now

Everybody be cool: Rethinking refrigeration solutions

What does the Independent Evaluation of the Global LEAP Off-Grid Refrigerator Competition tell us?