After a year of unprecedented disruption to education, teachers have been working double-time. Not only are they helping their students catch up from the lost learning of lockdown, they were doing everything to get ahead of the probable announcement of exams being cancelled, making sure teacher assessments are robust and reliable, and preparing for the now all-too-real lockdown.

We have had a front row seat to the unbelievable challenges teachers faced during the last lockdown, when we supported them to deliver STEM activities for the Amazon Longitude Explorer Prize over Zoom, and the in class bubbles last term. My admiration for their work is boundless, what they are achieving this term is nothing short of a miracle.

Teachers work so hard to get the best out of their students. They want to provide fun, exciting, creative lessons that inspire. Last year more than 800 young people between 11 and 16 applied for the prize, with 40 finalist teams being announced last spring. When lockdown meant schools had to close their gates, we were thrilled when all but four of those teams, led by inspiring teachers, carried on developing tech innovations for the big challenges of our time.

Setting students up for the future

Ultimately, the 2020 prize was won by a team of teenage girls who researched, developed and coded a smartwatch app to support people with dementia. It’s a cliche, but the standard of all the finalists was so high that it made choosing a champion very difficult. While there could only be one winner, all of the finalists were funded to submit their hard work for CREST Awards.

The CREST Awards are the British Science Association’s equivalent of a Duke of Edinburgh Award. They recognise achievement in STEM by students aged 11-18. Like the DofE, there are bronze, silver and gold awards. The Longitude Explorer Prize finalists were funded to apply for silver awards – reflecting achievement at Key Stage 4. It’s not only the prize judges that these young innovators have impressed, the BSA has advised a number of entries that they have – without realising it – been working at gold award level. This is usually reserved for sixth formers.

One of these is the ‘Tech T-Shirt’, from Dover Grammar School for Girls, it detects a wearer’s heart rhythm and alerts their emergency contacts in the event of cardiac irregularities. They applied their knowledge of STEM to deliver an innovation that helps people live healthier lives. They researched and created the concept, then worked with mentors in AI, data ethics and design to develop and programme a prototype. It’s an impressive achievement on its own – that they did this all during the last lockdown is even more so.

Their supervising teacher, Suzanne Aime, explained that it was the first time the school had entered student work for the CREST Awards, and that the young team members were so excited to have been told to go for gold. It was a big surprise to the students, but Suzanne describes their commitment to the project as “amazing”. The team had taken on things they had never done before, like website creation, developing chatbots, editing video, building apps and thinking about business models. They’ve now gone on to study computer science at GCSE and A-Level, they’ve shown a great interest in programming and are considering careers in STEM in the future.

The Dover Grammar School for Girls team, who created the Tech T-Shirt, which detects a wearer’s heart rhythm and alerts their emergency contacts in the event of cardiac irregularities 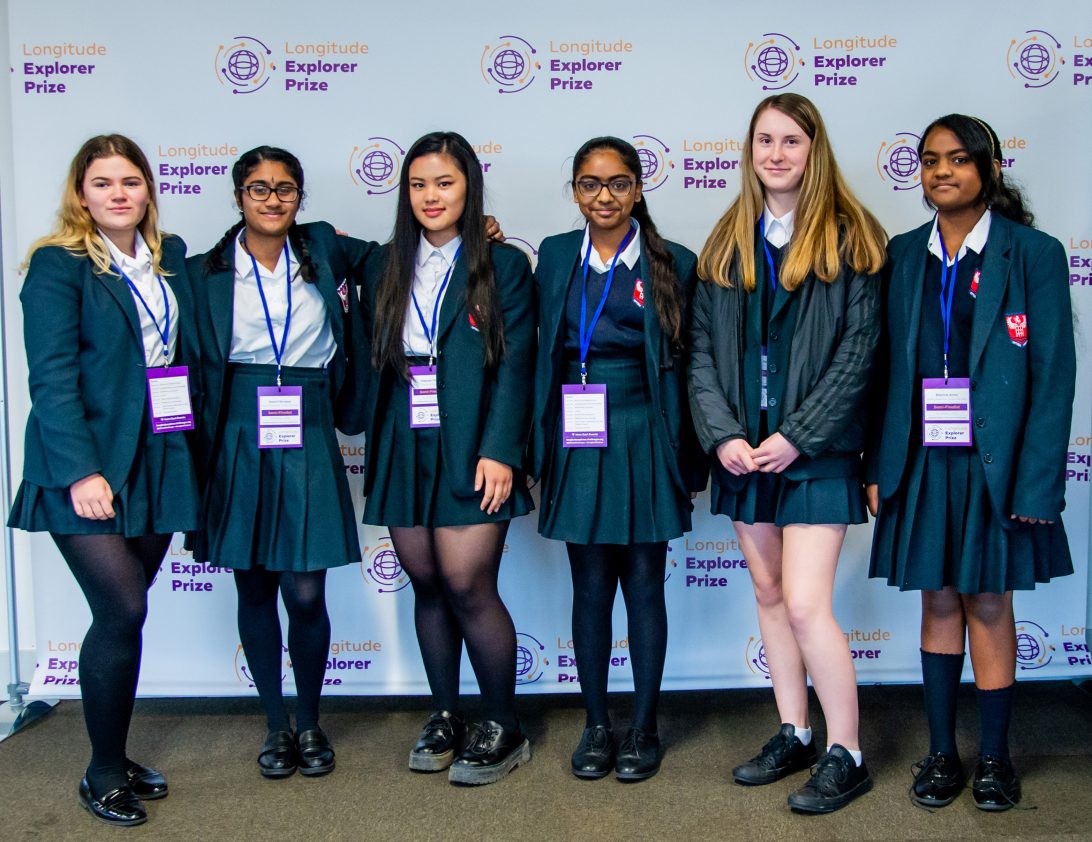 This has been an unbelievably tough year for teachers.

Faced with classroom bubbles and self-isolating students, and now a full on return to lockdown, they are working tirelessly to excite young people about science, technology, engineering and maths. Last year’s prize finalists excelled and persevered through difficult circumstances – many working at A-Level standard without knowing it. That is the power of inspiring teaching, and truly engaging lessons. The Amazon Longitude Explorer Prize is back this year where more young people will be putting their STEM skills to the test, supported by their extraordinary teachers to achieve great things.

This blog was originally posted on the Amazon Longitude Explorer Prize website. Find out more about how to apply to the Prize, or discover the free learning resources available.

Read more blogs about the Prize